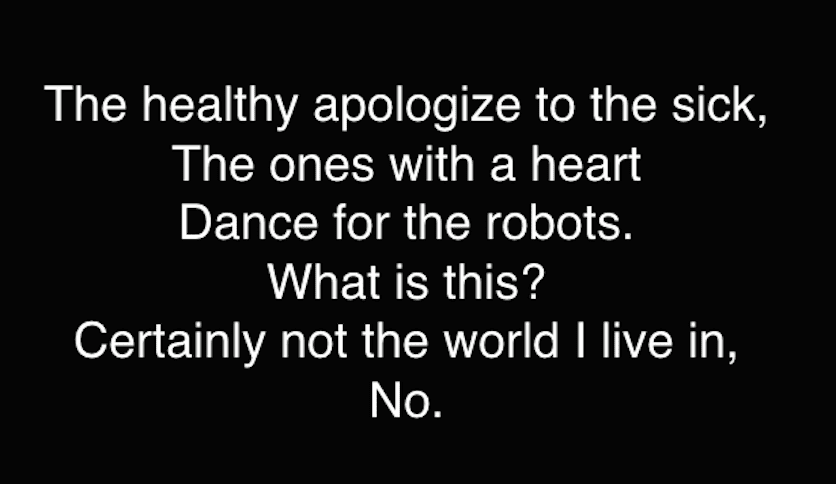 I know how to work Facebook for the purposes of branding. It is disgustingly easy. In fact, it is a lot easier to do it for a “brand” because the carefully crafted, stereotype-fitting, addiction-producing robotalk sounds a lot less idiotic if there is a perceived collective “we” justifying the idiocy.

But robotalk comes at a cost. When you do it, not only it makes the world a dumber place, it also it eats into your own happiness, and you don’t know it until you start feeling not so good.

There was a time when I dove into it full on. It was “the thing,” “thought leaders” on Twitter raved about it, and I believed the fuckers. And you know what, it even worked–but the more I practiced branding myself, the less happy I was.

So I stopped, and in the past few years, I’ve been conducting a social media experiment. I make a conscious choice to talk like a free person on social media. No formulas, no mental slavery.

IT IS NOT EASY.

I am happy as a lark but I have to work very hard for my likes, as if Facebook senses free spirit and fights back. They are, after all, in the business of turning love into $$$$$$$.

Some of my friends who jumped on the personal branding treadmill at the same time as I did (and never got off), get likes a lot easier than me today… but they are no longer happy. They turned into very presentable, secretly unhappy people, and it’s both blowing my mind and breaking my heart. You can never tell from Facebook, you need to talk to them in order to know.

Facebook is particularly vicious. Systems that let you read everything you are subscribed to in a chronological order, let you keep the control. They are, in fact liberating and useful. I’ve made great friendships from online places like that.

Facebook with its cryptic algorithmic filters and constant unpredictable changes, on the other hand, is a mad race for visibility, fueled by insecurity and an insatiable desire to be adequate. It’s a total psychological mess that started out, allegedly, as a ‘place to connect to your friends.’

What’s especially disgusting about Facebook’s approach is that its filters heavily favor predictability and lowest common denominator. That sends negative stimuli to anything that is special, beautiful and oddly shaped (the latter describes a normal human soul).

It’s people, yes, but also visibility. I’ve conducted many experiments. Let me repeat, I know how to work Facebook but it’s almost impossible to work it without paying a sacrifice in soul.

Maybe, the best word to describe it is the ‘dictatorship of format.’ And no, it’s not a new concept at all but use of powerful new technology allows Facebook to impose the limitations of machine systems on live people–and do so on a very large scale. It’s like proverbial communism but with no people around to take the responsibility for oppression.

This is destined to have very destructive long-term consequences for every human being who interacts with this system.

One of the things I did recently was disabling my personal profile. It’s quite amazing, actually, but it’s a story for another time.

Having disabled my personal profile, I still need to promote my band, right?

So I resorted to posting on my public pages. One thing I have to say about it is, good luck with that. Unless you are absolutely willing be a good corporate citizen and exploit the fuck out of stereotypes, you’ll need a lot of it. If you are willing to speak in formulas, on the other hand (as if you are a brand and not a nuanced human being), you are in the right place. Robotalk works just fine under the dictatorship of format. Dictatorship of format likes to eat the time of digital slaves and welcomes aspiring digital slave owners. It thinks those two are yummy.

But I fight robots, remember? So, in the name of rejecting slavery, I chose to retain control over my format and started boosting posts that I wanted people to read. And holy fuck, that is where the most interesting things started to happen.

If what my eyes see is any proof, there is also censorship.

Now, I’ve read many stories on Facebook censorship and psychological experiments on people. What I discovered is in its own category.

The other day, I tried to pay for promoting a poem against digital slavery, and they banned the ad. Three times. Each time, they would approve it, people would start liking it (the ad was performing better than many other ads I’ve seen, given it only ran a few minutes), and then immediately I would get a mind-dumbing and somewhat insulting notification that my ad was was not delivering because THE IMAGE CONTAINED TOO MUCH TEXT. Now, let me repeat, it was a poem. My image was a poem. There was no profane language (unlike here), no nudity, no violence, nothing that would normally stop the ad from being shown. And it WAS getting reactions. But they arbitrarily did not take my advertiser money ‘BECAUSE FACEBOOK PREFERS IMAGES WITH LITTLE OR NO TEXT.’ And of course, the rejection note did not contain any method of contacting a human being with a reminder that there was too much fucking text because it was a fucking poem.

Befuddled and pissed, I found a way to contact them, and got zero response. But isn’t it interesting what an artistic expression was effectively censored based on an arbitrary criterion that cannot be described in terms of common sense?

Nice precedent. Tomorrow, they may decide that Facebook doesn’t like color purple. Why? Because they can. Welcome to digital prison where only robotalk is allowed.